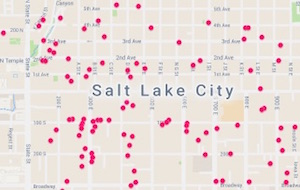 Google has launched what might be its last fiber project. Or maybe it’s the first deployment of Google Fiber 2.0. Residents and small businesses in the densely populated central area of Salt Lake City can now sign up for service, if they are in reach of the fiber plant that’s been installed.

As it typical, Google is hazy on the details of exactly where service is available, or what future expansion plans might be. However, one clue is the emphasis that Google is placing on apartments, condos and office buildings. According to a story in the Salt Lake City Tribune, apartment complexes had a head start on construction…

In terms of residential customers, [Scott Tenny, head of Google Fiber business operations in Utah] said, single-family homes will require a visit from an on-site installer, while many apartment dwellers will be able to switch on service more simply.

Google Fiber has taken advantage of a steep increase in apartment building in recent months, Tenney said, and wired a large number of new residential complexes during construction for easier access once tenants move in.

At this point, Google’ Salt Lake City deployment has more in common with its limited plans for San Francisco, where it is specifically targeting multiple dwelling units within reach of existing fiber that it can lease from other carriers, than it does with full city builds in, for example, Kansas City or Austin. Or the full city builds in Silicon Valley and Portland that were put in a deep freeze while Google evaluates fixed wireless service via magic radios.

A mix of fiber to the premise builds in areas that are sufficiently densely packed to make a business case and wireless as far as it will go elsewhere is a rational strategy for maintaining hopes of an acceptable return on investment somewhere down the road. It’s a strategy that AT&T embraced a few years ago, when it decided to focus wireline investment on high potential areas, and then followed it up with an aggressive and ongoing push to move less profitable wireline subs to wireless-based service.

It’s a sharp departure from the vision of a fully fibered future that Google dangles in front of communities it’s courting. The gigabuck realities of fiber builds seem to have changed that vision.

Wireless broadband feasibility study for the City of Oakland